One of the good news stories from the 2018 FIFA World Cup is about Japanese football fans cleaning the stadium after matches. The fans come prepared with big bags and when the match ends they clean up after themselves. We saw similar scenes at the last World Cup in Brazil four years ago. Scott McIntyre, a football journalist based in Japan, told the BBC that this inspirational part of Japanese football culture stems from Japanese culture itself. Japan places a strong emphasis on tidiness and cleanliness. These values are taught from childhood both in schools and at home. The result is a population which strives to leave a place as they found it- whether it’s a park or a stadium. The BBC has more here: https://www.bbc.com/news/world-asia-44492611

Football fans from Senegal have been following in the footsteps of the Japanese fans by doing their own clean-up. Following their win over Portugal the fans tidied all the rubbish from their section into one pile. It seems as though the Japanese football fans inspired the Senegal fans. The eyes of the world will be watching to see if other fans take a leaf from their book. Humans learn through observing others’ behaviour and this is especially true of children. When one person or group models a behaviour, it can show others that this behaviour is acceptable. This works for both good and bad behaviour. If children see adults littering they will think that this is normal and acceptable behaviour. This is why it’s so important for us to demonstrate environmentally-positive behaviours to other adults and children.

We can all be volunteers 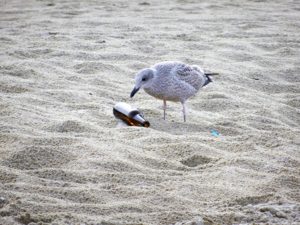 The fan clean-up highlight a really important point about environmental activism- we can all do it! One of the characters in Environment the Musical, Uncle John, is a TidyTowns volunteer. When the children realise that Millview Park is full of rubbish, they work together to clean it up.

It’s easy to feel that we need to be part of an official group to make a difference to the environment. Groups are definitely a fantastic way to have an impact but there is a huge amount that we can do by ourselves. This was part of what inspired #2minbeachclean (https://beachclean.net/). We might not be able to clean the whole beach by ourselves but we can definitely spare 2 minutes to lift what we can. During those two minutes we’re not only making the beach cleaner, safer and more visually-appealing, we might also inspire someone else to join in too. Check the site to see if your local beach has a #2minbeachclean station or simply take a bag with you.

Any time is a good time

It’s not just beaches that get littered, though. When was the last time you walked down the street and saw no litter? You probably don’t have time to pick up everything you see in daily life, but that doesn’t mean you can’t have an impact. If you can, grab that newspaper that’s blowing down the street or pick up the coffee cup left at a bus shelter.  At first you might feel a bit silly but we guarantee that after you’ve helped improve a small part of your surroundings you’ll feel fantastic! And of course, you’ll be inspiring the people around you to make a difference too. If you decide to be like the Japanese football fans, let us know!