Sometimes it can feel as though all of the news we hear about the environment these days is negative. The effects of climate change are more extreme, more species are close to extinction and some of the world’s largest countries are rowing back on environmental commitments. With all of that going on, we’re delighted to see some news outlets compiling lists of more positive stories. They certainly don’t cancel out the worrying issues, but they’ll give you hope that we CAN make a difference. Annette McNelis wrote Environment the Musical to educate and empower kids to look after their local environment. Here are some examples of the progress we’re making worldwide! 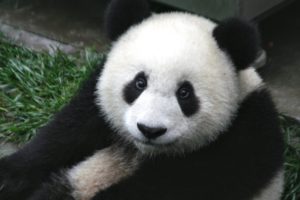 Giant pandas and snow leopards have been removed from the list of endangered species. Scientists now categorise both species as ‘Vulnerable’ which we hope is just one step on the road to their being removed from the lists completely. They also downgraded Iberian Lynx from ‘Critically Endangered’ to ‘Endangered’. In case you were wondering, we categorise non-endangered animals as ‘Least-Concern’ or LC.

The hole in the ozone layer seems to be recovering. In January NASA published a study showing that the hole in the ozone layer has recovered slowly but surely since their last measurements. The man-made chemicals that created the hole have long lifetimes which is why the recovery takes time. The Montreal Protocol signed in 1987 phased out chemicals known to deplete ozone- it’s great that we can now see real progress!

France became the first country in the world to ban supermarkets from throwing away excess food.  waste. Not only does this mean that shops will waste less food, the supermarkets donate the excess food to food banks and homelessness charities. In the past it was common for stores to use bleach on unused food or lock their bins to prevent foraging. Supermarkets that don’t comply with the new law face fines. Speaking of France, it has become the first country to ban all of the five pesticides known to kill bees. They are known as neonicotinoids and scientists have linked them with falling bee populations. Bees are crucial to both agriculture and natural eco-systems as they pollinate plants and crops. Without them our food chain would be in grave danger.

At the end of last year the World Bank announced that after 2019 it “will no longer finance upstream oil and gas”. Oil and gas projects make up 1-2% of its $289bn portfolio- a colossal amount of money. We know that fossil fuels have enormous negative environmental impacts, both during extraction and their later use by consumers. Environmental groups like Greenpeace welcomed the announcement.

If you’re interested in finding out more about Environment the Musical and how it can help create a new generation of environmentally-aware citizens, visit https://www.annettemcnelis.ie.